‘Toby Barnard’s Brought to Book is a delight: extensively researched, beautifully written, cogently argued … this book is a major intellectual and historiographical achievement. It will be the standard work on the topic for decades to come. It will undoubtedly be a constant, well-thumbed companion for generations of graduate students, but this elegant, erudite and exciting book will also find an appreciative audience among members of the public with an interest in eighteenth-century Ireland’, Jason McElligott, Irish Arts Review (Summer 2017).

‘An essential book for anyone interested in seventeenth and eighteenth-century Ireland … Toby Barnard’s knowledge of Anglophone Ireland during this period is legendary and, as this book demonstrates, his memory for detail and his ability to recall all he has read are awe-inspiring. The book contains an immense quantity of information … The material is all woven into a single, large, colourful tapestry – the richest work on the eighteenth-century Irish book trade and patterns of Irish reading ever attempted or accomplished … The volume not only gives one insights into the production and reception of books and pamphlets but also into the commercial and intellectual context of their publication. There are many delightful anecdotes … there are also many fascinating glimpses of people and arrangements of which nothing has been generally known until now … [this is a] complex and wide-ranging book’, Andrew Carpenter, Dublin Review of Books (June 2017).

‘There is no better guide to the human, social and financial contexts of print in the eighteenth century than Toby Barnard. For over half a century he has been combing the archives … and writing up the results. The style is terse and quietly sardonic at times, the content full of detail', Norma Clarke, Times Literary Supplement (July 2017).

‘Barnard addresses an impressive range of concerns including, but by no means limited to, censorship, the impact of imported and reprinted books, printed images and music, printing of Catholic interest, and political uses of print … [Brought to book] is successful in conveying a sense of the variety and complexity of printed publications in circulation during the period in question. Its particular strength lies in the presentation of meticulously researched evidence which offers new insights into the opinions and attitudes of authors, readers and collectors of printed publications in Ireland at this time … it will be essential reading for anyone with an interest in this subject for many years to come’, Suzanne Forbes, Eighteenth-Century Ireland (2018).

‘In a fascinating analysis of the types of material being published in Ireland between 1689 and 1789, Toby Barnard shows how the output of publications for and by the government, which accounted for close to two-thirds of titles in the late 1690s, diminished to only seven per cent a century later … this is a superb book and an important addition to the literature not just of the book trade but of the wider culture of eighteenth-century Ireland. Barnard has done a magnificent job in assembling a vast range of material and analysing it into a fascinating narrative', Peter Fox, The Library (December 2017).

‘Studies in print often focus on its production in metropolitan cores, but Barnard moves beyond Dublin and London and offers impressive detail on the complexities of disseminating printed ideas in the provinces … Barnard’s latest wok must be complimented for its meticulous attention to detail … it will, undoubtedly, inspire future generations to thin about books and print production in Ireland in more nuanced ways',  Eamon Darcy, History Ireland (Nov/Dec 2017) 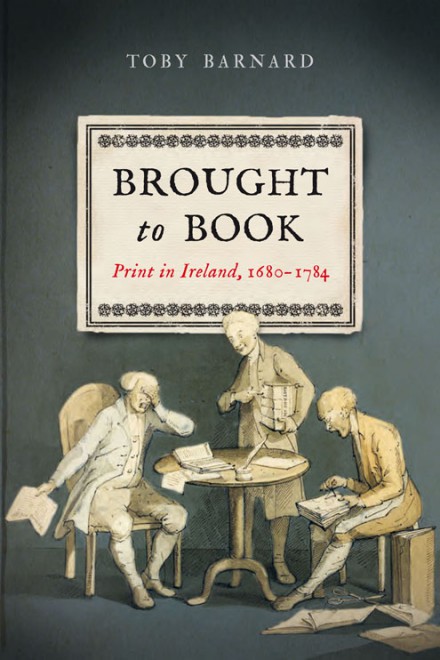