The Three Castles of Dublin

The Three Castles have been the symbol of Dublin since 1230AD, when they first appeared on a city seal as three towers situated around one of the fortified gates of the city. Over time, the towers assumed greater significance as a symbol and by the mid-16th century they had been separated into three distinct castles. The first formalised heraldic depiction of the castles was devised in 1607 by Daniel Molyneux, the Ulster King-at-Arms.

The origin of the Three Castles as a symbol is unknown and obscure. Did they symbolise the three garrisons outside the city’s walls in earlier times? Some speculate that they represent Dublin Castle, repeated three times, because of a mystical connection with that number. Perhaps they are not castles at all, but represent three gates of the Viking city.

Whatever the reason, the Three Castles has been, and remains, the official symbol of the city for nearly 800 years – a symbol that remains the same, yet with every reproduction was painstakingly drawn, designed and fabricated differently from the previous depiction. The only stipulation in any depiction is that two castles are placed over one.

Many Dubliners and visitors to the city will be familiar with the Three Castles as the symbol appears throughout the city, in various forms, on buildings, flags, water hydrants, plaques and streetlights. This fascinating and richly illustrated book follows the eclectic history of the city as it tracks the evolution of this notable graphic symbol.

Michael English studied art in Cork’s College of Art before completing a BA degree in graphic design at Liverpool’s College of Art. He worked for several years in Dublin for advertising and design agencies before setting up his own consultancy company, Black Mountain Design. 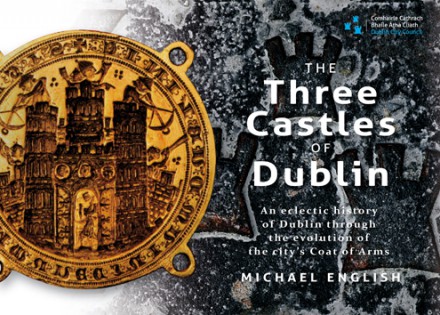