‘This book combines a short history of policing in Ireland with a detailed description of how to trace ancestors who were members of police forces operating in this country between 1816 and 1922. This combination of history and genealogy gives the book a wide appeal’, Irish Roots.

‘[A] valuable source of information about the later years of the RIC’, Irish Times.

This new, revised and expanded edition brings back into print an excellent resource for those interested in the history of the RIC and the revolutionary period generally.

In the period 1816 to 1922 some 85,000 men served in the Royal Irish Constabulary and its predecessor forces. In this book Jim Herlihy shows how to find information on these policemen, providing an excellent resource for those interested in the history of the RIC, and the revolutionary period generally.

Chapters on the history of policing in Ireland (to illustrate the type of men in the force, their backgrounds and their lifestyles etc.), are followed by a section on tracing ancestors in the RIC. This new edition details members of the RIC who were rewarded for their service during the Young Ireland Rising, 1848, the Fenian Rising, 1867, the Easter Rising, 1916 and the War of Independence, 1919–21. Also identified are members of the RIC who were killed in the line of duty from 1916 to 1922, members who volunteered for service in the Mounted Staff Corps or the Commissariat during the Crimean War, members who served as drivers or orderlies on secondment to the Irish Hospital Corps in the Boer War in 1900, as well as members who volunteered and served in the British Army in the First World War. RIC recipients of the Constabulary Medal (Ireland), the King’s Police Medal or the King George V, Coronation (Police) Medal, 1911, are also listed, as are ex-RIC men who transferred to the Garda Síochána or the Royal Ulster Constabulary in 1922 and received bravery medals. 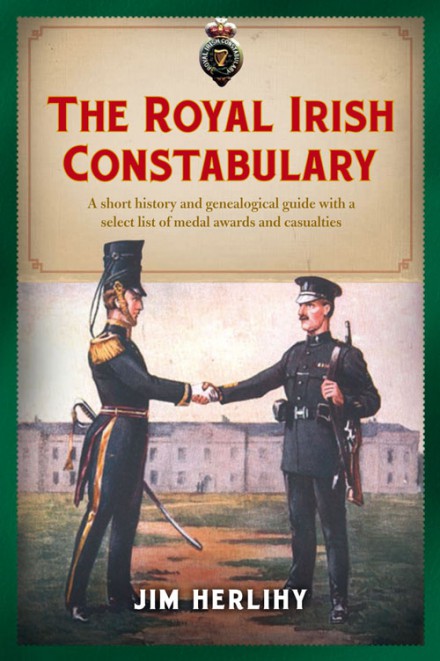