“McAuliffe and Gillis skilfully interweave the testimonies of various women and men who were involved in the Easter Rising into a balanced commentary of the period within its chronological and thematic chapters to demonstrate that women were not only involved in the Revolution, but that such participation was fostered upon various agendas and individual backgrounds which these women developed during their own engagements with cultural nationalism, labourism and women’s suffrage rights. Therefore, not merely present at the Rising to aid their male counterparts in the typified gendered roles of cooking, nursing and cleaning, many women participated in the Rebellion to contribute as much as any man sought to and as individual citizens of the Irish Republic ... McAuliffe and Gillis, accomplished historians and authors of activism, gender and sexuality, demonstrate quite clearly within this text their aptness for historical investigation through their comprehensive research of a cohort of women who did not leave a particularly well-endowed archival footprint. By doing this, they have widened the scope surrounding our understanding of the gendered, social and political motivations of the Irish Revolution..”. Judy Bolger, Irish Studies Review

‘Arguably one of the great success stories of the 1916 commemorations has been how the story of the women involved has been significantly addressed. One of the best examples is Richmond Barracks 1916 … along with chapters on the actual fighting, told from the viewpoint of the women participants, the authors provide a detailed biography of each of the 77, most of whose stories had been lost to history. Another fine Dublin City Council co-production’, Joe Culley, History Ireland (July/August 2016).

‘This work is of particular importance as it highlights the role of women in the 1916 Rising and in organizations like Irish Women’s Franchise League, Inghinidhe nah Éireann, Cumann na mBan and the women’s section of the Irish Citizen Army … This new book reveals the extent of the involvement of women from all classes and creeds in the Rising and in the events leading up to that fateful week a hundred years ago this month. McAuliffe and Gillis have researched not only the involvement of these seventy-seven remarkable women, importantly from a social history and genealogical perspective, the authors have researched the lives, carers and, often, the interconnectivity of the families concerned. Each woman has a section dedicated to her own life and times; indeed, many continued their political activism right up to the end of the Civil War in 1923. This 288 page book is wonderfully illustrated with photographs of most of the participants and with the biographical details on each of the women, this book is much more than a history of an aspect of the Easter Rising, it is an important work in the study of the role of women in Irish political, social and revolutionary movements. No reading of the events of Easter 1916 is complete without this book’, Michael Merrigan, Ireland’s Genealogical Gazette (April 2016).

‘Mary McAuliffe and Liz Gillis focus on the lives of these women and contextualize them within the social history of the period. As all seventy-seven women were detained in Richmond Barracks either en route to or from other prisons, the authors felt it was appropriate to use this story as a lens through which to commemorate the wider involvement and experience of women in the Easter Rising … [this book] represents an important addition to scholarly research into this period’, Maeve Casserly & Ciarán O'Neill, The Public Historian (May 2017).

‘This book is the first on the subject to reveal that quite a large proportion – perhaps the majority – of women who took part in the Easter Rising of 1916, came from Dublin’s working class. Mary McAuliffe and Liz Gillis focus on the 77 women arrested after the Rising who were brought to Richmond Barracks in Inchicore before being dispatched to other jails in the city ... [its] value will extend far beyond the decade of commemorations (1913–1923) in Ireland, and its wider significance for the history of women in political activism will ensure its permanence on bookshelves and reading lists ... A fitting testament to [Rosie Hackett] and to women like her', Cercles (June 2017). 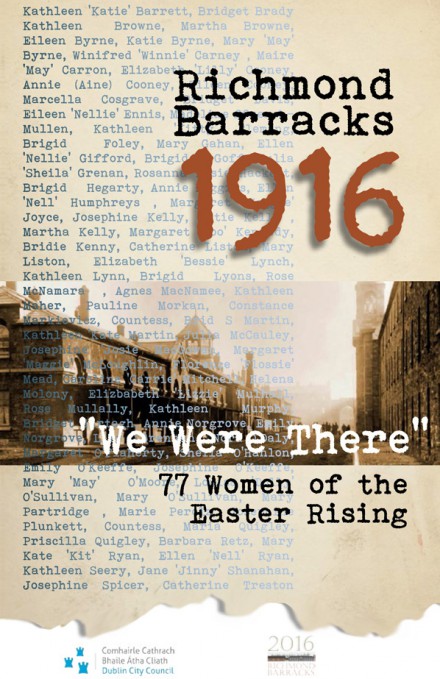