Essays in honour of Colm Lennon

‘Throughout this marvellous book are myriad reference to the qualities of the man which anyone who knows Professor Colm Lennon can readily attest to. A top-class historian, a first-rate teacher, and a kind and unfailingly helpful and courteous man … the editors have done an excellent job in corralling all of the essays into a unifying whole which stands as a well-deserved tribute to one of Ireland’s leading early-modern scholars’, Brendan Scott, Breifne Journal (2017).

‘This collection marks a significant contribution to the field of early modern Irish religious, social, political, urban, and intellectual history. Its expansive coverage and high standard of scholarship are a fitting tribute to the honorand, who as Ciaran Brady points out, deservedly holds the title of ‘doyen of the historians of early modern Dublin’, Bronagh Ann McShane, Irish Theological Quarterly (2017).

‘This [volume] is an apt testimony to Colm Lennon’s scholarship, which will continue to shape our discussions of English culture in both Ireland and England', Mark A. Hutchinson, British Catholic History (2017)

'By assembling essays that are both broadly conceived and deeply researched, Religion and politics in urban Ireland makes a welcome contribution to our understanding of early modern Ireland and a fitting tribute to one of the field's leading voices', Matthew C. Bingham, Journal of Ecclesiastical History (2018).

'The contents of this volume of essays range well beyond the date range indicated in its title ... neither is the book confined to urban Ireland. These qualities help to render this collection all the more fitting as a tribute to the honorand', John Cunningham, Urban History (2017).

‘This collection of essays , which acknowledges Professor Colm Lennon’s enormous contribution to the study of early modern Irish history, is an excellent edition … There is much to enjoy, engage and excite in this book …  The contributions, and the editors especially, must be applauded for producing an excellent volume worthy of the standards set by one of Ireland’s best early modern historians. This book is indeed a fitting tribute to both Lennon’s scholarship and the legacy he has created’, Mark Empey, Journal of the Royal Society of Antiquaries of Ireland (2016).

'The diversity, within a recognisably coherent over-arching theme, and quality of the contributions, echo Colm Lennon's own work and make this a fitting tribute', Pádraig Lenihan, Irish Historical Studies (Jan. 2019).

'This collection of essays was commissioned to honour the historian Colm Lennon, and its thematic and chronological boundaries reflect the prolific scholarly output of its honorand ... by assembling essays that are both broadly conceived and deeply researched, Religion and Politics in urban Ireland  makes a welcome contribution to our understanding of early modern Ireland and a fitting tribute to ine of the field's leading voices.' Matthew C. Bingham, Journal of Ecclesiastical History.

'Few historians of early modern Ireland have been as omnipresent in the field over the past forty years as ... Colm Lennon ... in the 1970s and 1980s, Lennon was ... injecting life into the study of urban elites in early modern Ireland, most notably those in Dublin, but also further abroad in Limerick and other cities, often through detailed case studies of figures such as Richard Creagh. In additio he has been one of the most important contributors to the religious history of early modern Ireland in the past several decades ... the volume celebrating Lennon's career to date ... amply demonstrates just how wide Lennon's scholarly output has been', David Heffernan, Studia Hibernica vol.44. 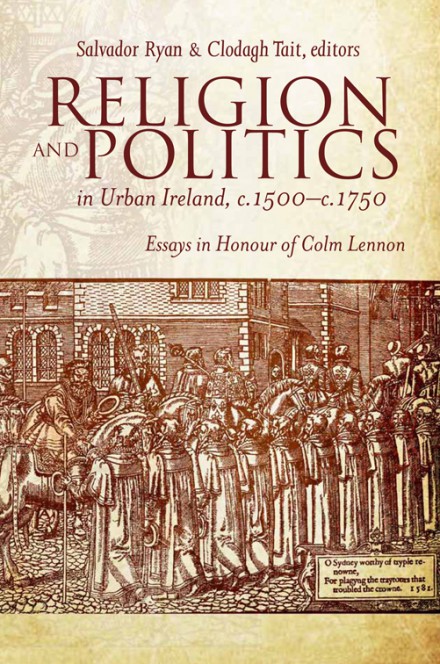