Proceedings of the Friends of Medieval Dublin Symposium 2013

This volume contains reports on a number of important archaeological excavations in the Dublin area in recent years, including: Claire Walsh’s discovery of the remains of Hiberno-Norse and Anglo-Norman houses at Back Lane; Paul Duffy’s excavations at Baldoyle that produced evidence from the Viking Age onwards; and Edmond O’Donovan’s discovery of a large early Christian cemetery at Mount Gamble in Swords. To accompany his detailed report on the latter the volume includes an important study of the ecclesiastical and political history of the Swords area written by the late Ailbhe MacShamhráin. Also of note: Craig Lyons analyses the emergence of Dublin in the late tenth and early eleventh century as a more distinctively Irish sub-kingdom; Catherine Swift sheds new light on the famous account of Brian Boru and the battle of Clontarf called Cogadh Gaedhel re Gallaibh; Daniel Brown has a fascinating account of what happened in 1223 when Hugh de Lacy, the dispossessed earl of Ulster, raised a rebel army and marched on Dublin; Bernard Meehan describes the recent acquisition by the Trinity College Library of a hitherto unknown manuscript compiled in St Mary’s Abbey in the city in the early fourteenth century; Brian Coleman presents the first fruits of his meticulous study of the elite of Dublin city and county in the later Middle Ages; Dianne Hall examines everyday violence in the medieval city and environs; and, to mark the 700th anniversary of the Scottish invasion of Ireland by Edward Bruce in 1315, we include a hitherto-unpublished essay by the late Professor James Lydon on the Scottish threat to capture Dublin.

Seán Duffy is professor of medieval history at Trinity College Dublin, and chairman of the Friends of Medieval Dublin. He has edited fourteen previous volumes in the Medieval Dublin series. 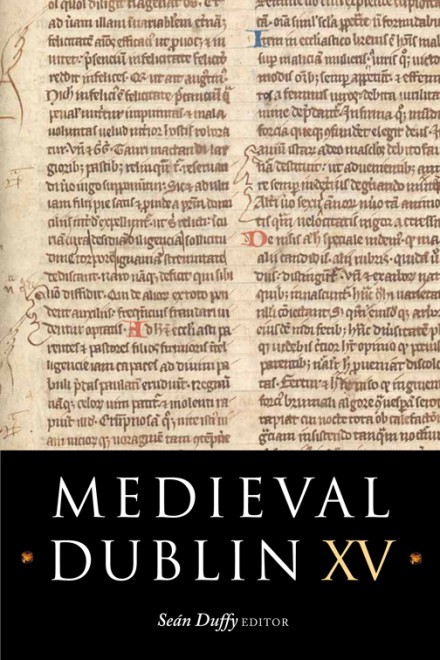