‘The author brings to his subject the breadth of knowledge that allows for additional anecdotes and facts that enhance his central themes … This is essential reading for theatre-goers, students of drama and those who continue to have a fascination with censorship and the controversial aspects of theatre’, Timothy P. O'Neill, Irish Economic and Social History (2016).

‘With a deft hand the author steers his way through controversies and laws that determined what theatregoers might see on the Irish stage, and describes the circumstances of various staged productions … he engages his readers along the way with appropriate anecdotes and an occasional dash of humour … This is a volume rich in detail and incident … This well-written volume is a useful resource for those making informed decisions about the future of Irish theatre – and a good read for theatre enthusiasts too', Colum Kenny, Studies (Autumn 2016).

‘[An] important new study … this is the first study to examine the history of the Irish stage primarily and exhaustively from a legal perspective. Osborough’s book covers a series of legal topics in turn, including theatre patents, health and safety, performer contracts, riots, censorship, the application of licensing laws and entertainment duties to the theatre, and performing rights … Osborough’s book is full of original and ground-breaking research, centred mainly around his analysis of court records and parliamentary proceedings … At key moments throughout the book, he makes fascinating connections to fictional and poetical works related to the time period and the subject being discussed … there is no doubt that Professor Osborough’s latest book is an invaluable resource for anyone interested in Irish theatre history and/or the legal wrangles associated with the Irish stage’, David Clare, The Irish Jurist (2016).

‘W.N. Osborough’s meticulously researched new book examines the complex history of patents, licences and legislation that affected the development of the Irish playhouse … Osborough provides a highly original study that helps reorientate attention away from the prominent personalities and personal clashes of literary history, towards an understanding of how Ireland’s drama was regulated by less familiar officials and managers, and how this drama was received and experienced by Irish spectators … The Irish Stage is richly rewarding, and will prove an invaluable resource for future researchers of Irish dramatic history’, James Moran, The TLS (March 2016).

‘Professor Nial Osborough is the doyen of Irish legal academics … [he] has certainly served his time as a teacher of mainstream law subjects … But his distinguishing feature is that his cultural hinterland is much broader than that of the average lawyer or law teacher and to my mind his legal insights are much the sharper and more realistic for that’, Mr Justice Adrian Hardiman, Supreme Court of Ireland, Dublin Review of Books (February 2016).

‘While the history of Irish drama has been examined extensively … Professor Osborough has a rather more ambitious task in his sights. In The Irish Stage we see all the legal forces which may act upon such entertainments, affecting what we see and how we experience theatre ... Osborough’s meticulous research covers the expected issues of copyright, censorship and episodes of unrest which have occurred in response to dramatic productions. Crucially, attention is also paid to less well-trodden areas, such as the Dublin theatre patents regime, contract and labour law matters, as well as rules pertaining to the offstage experiences of theatre audiences: health and safety regulations (ch. 10) and rules pertaining to refreshments for patrons, such as liquor licensing (ch. 11) ... Throughout The Irish Stage, Osborough grounds his analysis in a sweeping chronology that extends from the seventeenth century to the present day. The result is an important study not only of cultural and legal history, but also aspects of social and political history', Yvonne Salmon, Law Quarterly Review (January 2017). 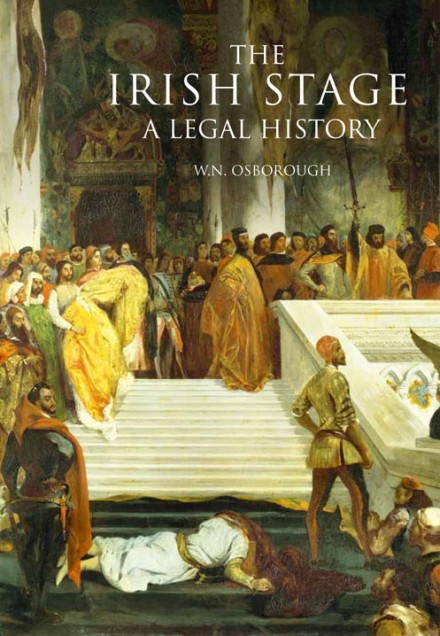