A selection of the sermons of James Saurin

‘This edition offers the reader a transcription of 24 of the 61 sermons written by the Reverend James Saurin (1720–72), vicar of Belfast 1747–72, and preserved in St Anne’s Cathedral, Belfast … The 24 sermons are supported by an excellent introduction, which presents biographical information on James Saurin, a snapshot of the Church of Ireland community in Belfast, and some general information on how the sermons were used and modified … this edition offers very valuable insights into the preoccupations and beliefs of a second-generation Irish Huguenot clergyman and the Church of Ireland community in Belfast in the second half of the 18th century’, Jane McKee, Huguenot Society Journal (2016).

‘This selection of sermons exemplifies a rare insight into the ongoing pulpit ministry of the vicar of Belfast … The informative introduction paints an interesting picture of James Saurin and the context in which he ministered … While the helpful and informative introduction places Saurin and his sermons in context, it is the 24 sample sermons which form the bulk of this book. They hold a fascination as a primary snapshot of aspect of ecclesiastical life in Belfast in these years … This volume provides a clear image of a significant ministry in 18th-century Belfast’, L.S. Kirkpatrick, Irish Theological Quarterly (2016).

‘If these sermons are anything to go by, the minority status of his flock does not seem to have affected James Saurin’s confidence in the mark that he and they could make in the life of the city. In many ways Saurin was a pretty exemplary clergyman: resident, active, innovative and generous. He took an interest in the world around him without developing an obsession with politics which has been a besetting sin of so many in Ireland. He would have been worth listening to on a Sunday and had something interesting to say on most subjects … Saurin was of Huguenot stock, in fact from a line of distinguished scholars. The breadth of his reading and interests is evident in the sermons … This book has the tremendous advantage of a lucid and compact introduction by a very distinguished scholar who writes with great knowledge and verve. Although better known for his contribution to the study of Ireland in the seventeenth century, Raymond Gillespie also knows a thing or two about the entire history of his native city. Professor Gillespie has been very ably assisted by Roibeard Ó Gallachóir’s painstaking transcriptions and notes from the manuscripts’, John McDowell, Church of Ireland Gazette (April 2016).

‘The sermons reproduced here have been fastidiously transcribed, warts and all, by Riobeard Ó Gallachóir. Excellently produced by Four Courts, the book benefits from a relatively short, very readable, but scholarly, introduction by Prof. Raymond Gillespie … the book throws a fascinating light onto, in miniature, the world of the 18th-century Anglican cleric in Ireland’, Ian D'Alton, Irish Catholic (October 2015).

'...let us ... welcome this seventh publication in the 'texts and calendars series' published in association with the Representative Church Body.' - Familia Ulster Genealogical Review (2017). 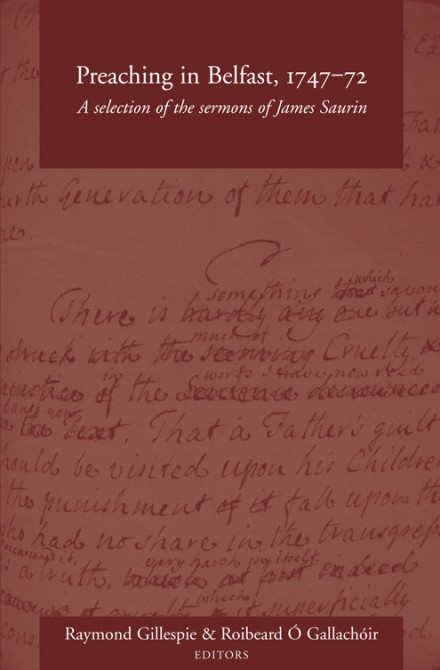