A vivid history of Dublin unfolds in this exploration of more than one thousand years of bridges over the river Liffey. From the time of the Vikings and their simple, wooden bridge, through Dublin’s late 17th century expansion when four new bridges were built within 14 years, to the iconic Ha’penny Bridge the story of a city and its bridges is told.

Dublin’s bridges are not mere structures. They are monuments to heroes and heroines, celebrations of a great literary heritage, romantic reminders of gentler times and futuristic style statements of a city’s confidence in itself. They are portals to the city’s past revealing tales of bloody battles, political intrigue, innovative engineers and architects, dubious developers and romantic liaisons.

From the oldest surviving, Mellows Bridge of 1768, to the newest, the Rosie Hackett Bridge of 2014, all 24 bridges and those they replaced are eloquently described. Striking photographs, reproductions of old maps and illustrations along with suggested walking tours complement the remarkable story of the bridges of Dublin. Lavishly illustrated, this book is essential for all those who are interested in this important part of Dublin’s history.

Annette Black is a writer and teacher living in Co. Wicklow.  She is the author of the website bridgesofdublin.ie and has written and published on both historical and educational topics. Over the years she has contributed to print media as diverse as The Irish Times, The Guardian and Ireland's Own while also contributing to radio programmes such as ‘Sunday Miscellany’ and numerous educational and lifestyle radio programmes, many of which she also presented.

Author and historian Michael B. Barry, from West Cork, studied engineering and economics in Trinity College, Dublin. He has worked on transportation projects both in Ireland and around the world. With a strong interest in history and heritage, Michael has written several books. He lives in Dublin. 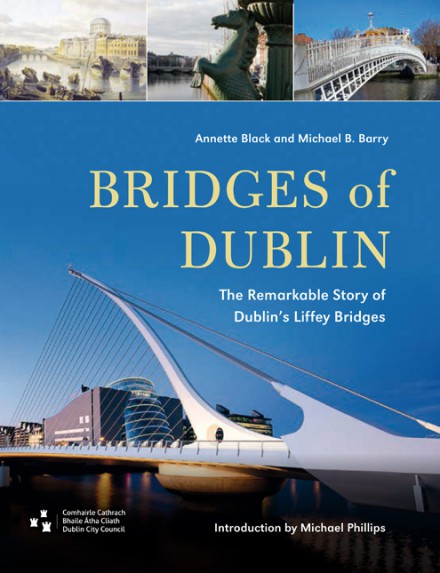