The works of Walter Quin

An Irishman at the Stuart courts

‘John Flood’s The Works of Walter Quin: an Irishman at the Stuart courts is a valuable new addition to early modern Irish and Scottish literature, archipelagic studies and, perhaps most informatively, the political and cultural context of the late sixteenth and early seventeenth centuries; specifically, the prospective succession of James VI to the English throne, and the period’s revival of British mythography. Flood’s biography of Quin reveals a significant figure; while Quin’s writing, cross-border interests and court standing in Edinburgh and London happily compel the reader to further acquaint themselves with this politically engaged writer … The Works of Walter Quin is an attractive looking and enlightening collection. It reintroduces a figure of literary and political significance, and several major works that ought to be of interest to early modernists across a range of subjects’, Christopher McMillan, Irish Studies Review (2016).

‘[Quin’s] output of prefatory verses, occasional poems, anagrams, and other texts for his patrons – here assembled through the painstaking detective work of John Flood – is notable for its engagement with literary fashions, and for its linguistic versatility: Quin wrote fluently in English, Latin, French and Italian. The chief interest of the collection, however, may lie in its politics. Quin’s affiliation with the Stuart cause, and his determination to establish Ireland’s place under their rule, provides a fascinating side-show to the drama unfolding around Hugh O’Neill … a handsome volume … the work of Flood and his translators is impressive … historians and literary critics will receive it with enthusiasm as a valuable contribution to our knowledge about Irish politics and writing in the renaissance’, Deirdre Serjeantson, Dublin Review of Books (May 2015).

‘Dr Flood has produced a fine edition of the works of an elusive, though potentially interesting, figure who may have a good deal to tell us about the Irish abroad in the sixteenth and early seventeenth centuries. This volume not only provides reliable texts for Quin’s works but also accessible translations of both the prose and verse, and it is certainly to be welcomed’, Raymond Gillespie, Studia Hibernica (2015).


‘In this substantial and accessible new edition in the Literature of Early Modern Ireland series, John Flood introduces us to the fascinating but hitherto barely known figure of Walter Quin (ca. 1575–1640). Quin turns out to be a writer of great contrasts and connections: a young Dubliner … whose poetry about the English succession caught the eye of King James VI of Scotland and caused him to be appointed tutor to Prince Henry; a dubious newcomer to Scotland and unwary critic of the Cecils who would nonetheless remain comfortably in the pay of the Stuart kings for his lifetime … the edition will be welcomed by scholars of both early modern Ireland and Stuart literary culture’, Jane Grogan, Renaissance Quarterly (2016).

‘John Flood’s edition of the writings of Walter Quin is a welcome addition to the literature of early modern Ireland … Quin’s writing sits within the Stuart world of the learned and the courtly, and Flood’s book will be of interest to all scholars of that period … Flood’s book stands as an impressive exposition of the works of Walter Quin, a useful study of an important poetic figure in Irish and Scoto-Britannic history’, Alexander J.K. Farquhar, English Studies (2016).

‘The Literature of Early Modern Ireland series … continues to produce handsome volumes of works that are neglected or inaccessible, edited to a high standard, recovering and commenting on texts that offer unique contemporary perspectives not just on Ireland and Irishness, but on the influence of Irish writers more broadly ... Flood’s editions are complete with translations of the Latin, French and Italian works and are base on unique manuscripts … and on collations of various copies of the first edition in the case of printed works. His introduction is lively, detailed and accessible, and his presentation and discussion of the works themselves is both clear and informative … The volume is a very welcome addition to a sophisticated series, offering compelling insights into the place of an Irishman … in the complex and tension-filled landscape of royal power in England and Scotland', Carrie Griffin, Óenach: FMRSI Reviews (2016). 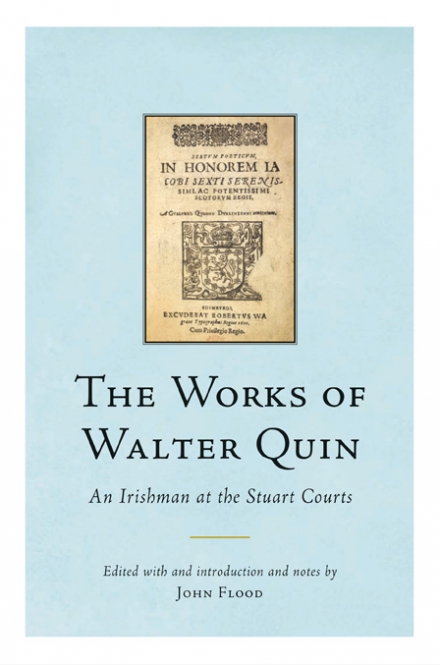