‘This book is a well-researched and argued study of a key county in the revolutionary period’, Peter Mulready, Irish Sword (Summer 2015).

‘Fergal McCluskey is ideally placed to tell the story of County Tyrone in these years … he carries on the story of nationalists, republicans and their divisions but also broadens it out very successfully to encompass developments within unionism. It is this breadth of coverage which will mark out the story in the North from much of the rest of Ireland’s counties … Chapter 2 in the book offers a picture of opposition to Home Rule in 1912–1914 that is essential reading … [McCluskey’s] use of private papers is excellent … The events of the period are all dealt with in turn and this narrative is skilfully done … This book sets a high standard for the county histories to follow and more than meets the aims of the editors to deal with not only the events of the period (political and military) but to look at the labour movement, the role of women and the class politics which McCluskey shows to be very important’, Eoin Magennis, Seanchas Ard Mhacha (2015).

‘In a penetrative analysis, McCluskey probes the impact of the Government of Ireland Act of 1920 and Anglo-Irish Treaty of 1921 on the relationship between political elites and local communities … [this] is an impressive contribution to the historiography of twentieth-century British-Irish relations. McCluskey’s examination of Tyrone’s political culture is illuminative of broader British and Irish political ideologies … the blurring of methodological boundaries between history from above and history from below invests in this study a sense of contemporary contingency and counter-narrative, essential to understanding the revolution’s causes and courses. McCluskey’s analysis, meanwhile, is grounded in an exhaustive exploration of archival sources ranging from local newspapers to British cabinet records … McCluskey’s important study presents an Irish revolutionary history primed for fresh interrogation’, Darragh Gannon, Irish Literary Supplement (Fall 2015).

‘This book explores the revolutionary period in a manner that produces a social narrative that is hugely important to the local historian and the genealogist. McCluskey uses the national movement and its significant events as merely a backdrop to the local and more personal conflict it produced in County Tyrone. It wasn’t just a nationalist versus unionist struggle, it had all the elements of a local sectarian class struggle with the landed elite stoking and harnessing the fears of the Protestant minority for its own political ends, especially for the control of local government from 1899 onwards … For those with ancestral connections to Co. Tyrone, especially over the past one hundred years, this book is as much an essential read as it is for any student of the Irish revolutionary period’, Michael Merrigan, Irish Lives Remembered (July/August 2014).

‘This account of the revolution in Tyrone is forcefully presented and McCluskey’s analysis is based on a strong critique of British imperialism, Irish unionism and serious divisions in nationalist leadership and objectives. The sources used are very well documented … most will come away from this engrossing account with a deeper knowledge of a traumatic period in Tyrone’s history and a greater awareness of the legacy of the past as an influence in modern attitudes and inherited allegiances’, Johnny Dooher, Due North (Autumn/Winter 2014). 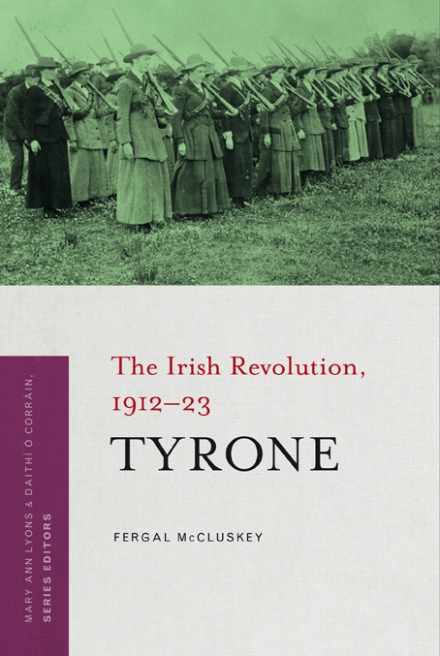