‘Pound for pound, a winner – James Kelly has written a terrific account of the sporting passions that captivated the Irish before GAA, soccer and rugby … By far the strongest chapter in the book is that which details the growth of horse racing across Ireland. The chapter is a model of how an in-depth analysis of a wide range of sources can be used to reconstruct a fascinating and multilayered history … the book is well illustrated … Kelly’s work is a wonderful, scholarly reconstruction of how sporting practices, and in particular its organisers and patrons, functioned … In Kelly’s book we can observe the primordial soup from which modern sport in Ireland would emerge', Michael Cronin, Irish Times (August 2014).

‘[This book] offers a wealth of information relating to the formation of national identity, social class and religious divisions in Ireland, as derived from Irish recreational and leisurely practices … easily the finest in its class, the volume remains easy-to-read and engaging, due in large part to Kelly’s compelling style … Both concise and beautifully-written, Kelly’s conclusion addresses issues of society and culture more abstractly … With its rich bibliography and thorough approach, Kelly’s Sport in Ireland is the standard-bearer in its genre’, Robert Hudson, Sixteenth Century Journal (Fall 2015).

‘Kelly does provide some fascinating reconstructions of familiar sports in their infancy … It is a carefully drawn picture of sport’s evolving status over three centuries, influenced by religion, class war, rebellions and sectarianism, and confirms its role as a mirror to the community it serves', Michael Foley, Sunday Times (October 2014).

‘James Kelly has contributed massively to the political, legal and administrative histories of what he calls “late early modern Ireland” (roughly between 1660 and 1850) … In tackling organised sport, he concentrates on horse-racing, hunting, hurling and other games with stick and ball, cock-fighting, pugilism, and a number of less popular or more elusive activities … Professor Kelly has put all interested in the Irish past in his debt. The book goes far beyond an unparalleled collection of new information … Professor Kelly has proposed and documented cultural and behavioural developments with implications which reach far beyond the sporting world. The ripples from the pebbles that he has tossed into the historiographical pond are set to reach unexpected shores’, Toby Barnard, Irish Historical Studies (November 2014).

‘The book opens with a remarkably detailed account of the rise to preeminence of horse racing in Ireland ... This is an impressive piece of research that documents the slow, steady expansion of horse racing in Ireland through the seventeenth and eighteenth centuries to the point where it can legitimately be presented as the most successful sport in Ireland and the first to “make the transition from an occasional, into a structured, and identifiably modern, recreational activity. It was also the only sport, other than hunting, to achieve a truly national profile” … This is a valuable book, one that brings a fresh perspective to the study of the history of sport in Ireland and opens up numerous questions worthy of further explanation’, Paul Rouse, Journal of British Studies (2015).

‘This is a massive undertaking that [Kelly] has taken on, and he has succeeded in producing a revelatory exploration of this vast topic. This pioneering book takes it place amongst the most important works in the recently burgeoning field of Irish sports history … Kelly has succeeded admirably in his task of elucidating the sporting landscape from the early seventeenth to the mid-nineteenth centuries in this very important work’, Brian Griffin, Irish Studies Review (2015)

‘A superbly researched and beautifully written hardback book … a must-have book for sports enthusiasts, historians and anyone interested in the development of sport over the centuries', Clare County Express (June 2014).

‘What fascinates about Kelly’s book is that is examines sports in an era before such games were “improved” or became viewed as a useful conduit to forge nationalist identities or build character. He takes us into an era where sport was a ruckus, raucous and uninhabited kaleidoscope of pastimes that evolved locally … this remains an interesting exploration of social changes occurring in pre-famine Ireland and how an influx of occupations brought their pastimes with them. Kelly is more than successful in this aim of recovery, in reclaiming aspects of a social life in a vanished Ireland that were so localised as to be barely recorded, let alone examined in such a measured context as this', Dermot Bolger, Sunday Business Post (August 2014).

‘[This book] offers a fine insight into the sporting culture of Ireland before the emergence of modern organised sport. This is an extraordinary piece of research … The world of sport illuminated by James Kelly extends across bowling, tennis, athletics, handball, long bullets (road bowling), pugilism, wrestling, cricket and pitch-and-toss … this is a valuable book, one that brings a fresh perspective to the study of the history of sport in Ireland’, Paul Rouse, Dublin Review of Books (June 2014).

‘This book is welcome because it examines material that is largely unmined … The book is as much about the social history of the era as it is about sports … Most of the coverage of [horse] racing here is of the era before the Turf Club and is all the more welcome and valuable for that … The [blood-sports] section of the book is replete with fascinating information about a vanished age when cruelty to animals was tolerated widely … The section on pugilism, which does not seem so alien to the modern sport, is quite colourful. It contains many reminiscences of famous bare-knuckle boxing matches between Irish and English champions … This book is a fascinating look at the kaleidoscope of sporting activities in these centuries. It highlights differences in social organization and morals between then and now', Hugh McFadden, Books Ireland (September/October 2014).

‘The history of sport, as portrayed here, also allows a good insight into the balance of social power in Irish society before the Famine … By writing this book, James Kelly has not only done sports history in Ireland a great service but Irish history in general’, Eoin Magennis, Irish Literary Supplement (Spring 2016).

‘For readers looking for a history of Irish horse racing or other sports and activities of the Emerald Isle, there is much to find in this book. For others interested in a more general study of how a society as a whole makes choices – economically, politically and socially – about what it deems acceptable and not in terms of sport and recreation, as well as what factors and forces act behind and surrounding such choices in a nation’s sport history, James Kelly’s Sport in Ireland offers a detailed and interesting case study’, Connie Ann Kirk, H-ARETE (2014).

‘James Kelly’s scholarly enterprise is to be welcomed. Its scope is ambitious, even heroic … The range of primary sources consulted is prodigious. In particular, he has made extensive use of contemporary periodicals and newspapers, from the Anthologica Hibernica to the Tuam Herald, conscious that the press is not only a repository of useful information but also an agent int eh process through which modern sport was invented’, Dilwyn Porter, The International Journal of Sports History (2014). 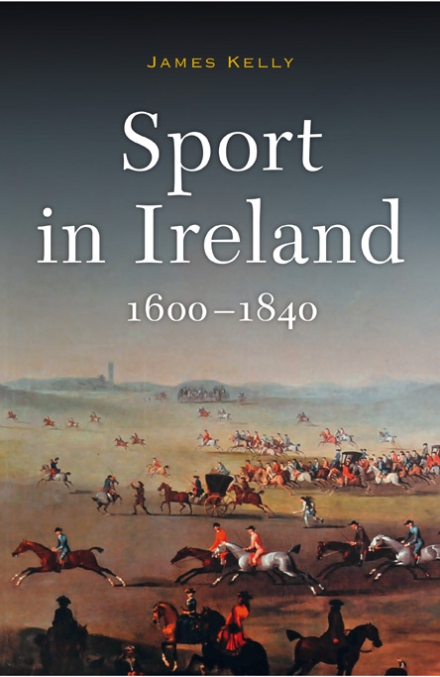