‘Deana Rankin’s is the first edition sine 1641 of the only published play by Henry Burnell … This fine scholarly edition of Landgartha helps to unfold the occluded verso of more familiar works such as Jonson’s Irish Masque at Court or Shirley’s Triumph of Peace … The real value of this edition is Rankin’s lengthy introductory essay, which provides the reader with a complex and nuanced set of coordinates for reading Landgartha in the most sustained exploration of the play thus far … Rankin’s introduction makes sense of Landgartha by restoring its complexity … we begin to understand why Landgartha needs to be read as more than a historical curiosity. This splendid new edition now makes that possible’, Chris Morash, Renaissance Quarterly (2017).

‘Landgartha is the story of an Amazonian warrior and her merry band of all-female fighters, who, due to their infamous martial prowess, are constantly called on to help the King of Denmark … Rankin’s introduction does give the reader the historical context, and successfully establishes Landgartha as a play which challenges the accepted canon of Renaissance drama', Anna-Maria Ssemuyaba, TLS (May 2014).

‘Rankin’s edition [of Landgartha] retains most of the original spelling, punctuation and lineation from the Bodleian copy of the 1641 edition of the play, which she has collated with six additional extant copies in the United States and United Kingdom … Rankin’s introduction to the text is both detailed and wide-ranging, beginning with an account of Landgartha’s critical history … On the whole, the edition contributes ably to the extension of the canon of early modern drama with a text and introductory material that offer a fascinating glimpse into the complex intersections of performance, print and politics. It will no doubt encourage multiple generations of students and scholars to learn more about Burnell, the venues for dramatic performance that existed outside of the commercial playhouses of England, and the manifold, shifting worlds they staged’, Vimala C. Pasupathi, Review of English Studies (April 2015). 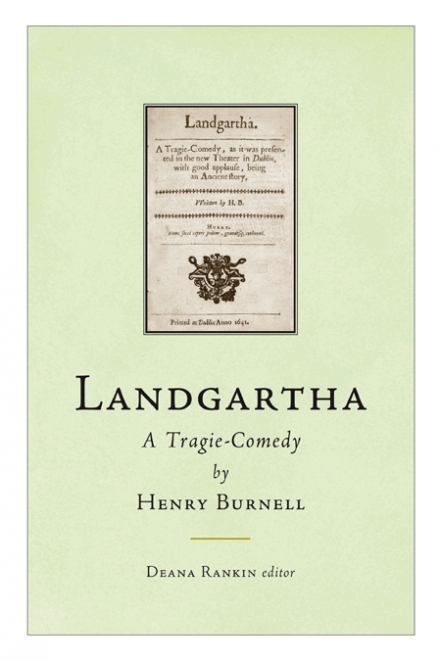