Ireland, the United Nations and the Congo

A military and diplomatic history, 1960–1

'An incredible contribution to our history ... something that was previously hidden has now been revealed', Patrick Geoghegan, Newstalk 106–108FM (September 2014).

‘Kennedy and Magennis focus on the nature and impacts of Irish involvement in the United Nations’ peacekeeping mission in the 1960s in what is now the Democratic Republic of Congo … [this is] a detailed case study based on personal recollections and detailed analysis of United Nations correspondence and other data sources … Ireland, the United Nations and the Congo is a detailed narrative history, which nonetheless reads like a thriller at times … The portrait that emerges from the book is that the soldiers conducted themselves with honesty and bravery, while the machinations of the former colonial powers and private businesses greatly complicated their task … The book is well written and exquisitely detailed and provides a blow-by-blow account of the different military engagements and how they unfolded. It will be of wide interest not only to academic historians but to a more general readership’, Pádraig Carmody, Irish Economic & Social History (2015).

‘The book is meticulously researched and while it examines events fifty years ago, there are many parallels to current debates on peacekeeping such as peace-enforcement, cover-ups of atrocities committed by blue helmets and the political calculations of troop contributing countries’, Denis Fitzgerald, UN Tribune (August 2014).

‘As a military and diplomatic history it has many strengths, principally its showcasing of original and highly revealing archival material, and an admirable clarity in providing a more robust and honest version of the mission than has been available to date … Michael Kennedy has long been established as an impressive historian of Irish foreign policy; his collaborator, Art Magennis, served two tours of duty in the Congo … The authors are scathing about the level of deception and incompetence that marred the UN mission. It resulted in what is described as the most serious foreign-policy challenge for Ireland since the second World War … There is no shortage of detail about military tactics and equipment, as well as information about battalion structure and staffing issues … the descriptions of the military operations from the Irish troops’ perspective are vivid, compelling and disturbing', Diarmaid Ferriter, Irish Times (October 2014).

‘This is not a piece of military history combined with a piece of diplomatic political history but a single, well-integrated book … this is the best account [of the conflict] to date … Unwittingly, but movingly, the book contrasts the unthinking carelessness of the men in suits (and in the army’s upper ranks) with the attention to their duties of the battalions on the ground in Africa – and those men, alone, emerge with honour from this account … this book is important not just as a contribution to the diplomatic and military history but also as a window on the growth in the Irish state’s self-awareness and self-confidence in the early 1960s’, Thomas O'Loughlin, History Ireland (March/April 2015).

‘An excellent addition to a growing corpus of works on Irish diplomatic history … Dr Kennedy has taken this personal memoir to a completely different level as a basis for a new study of the Irish involvement in United Nations peacekeeping operations … This book is essential reading for those with relatives who served in the Congo and for the military historian’, Michael Merrigan, Ireland’s genealogical gazette (July 2014).

‘A valuable account of events in [the Congo's] complex theatre of operations. Magennis’s recollections are invaluable for the historical record, and Kennedy has done some Trojan work in unearthing hitherto-unseen UN documents that throw fresh light on the difficult, if not impossible, attempt to run what was essentially a jungle war from the far-off confines of UN headquarters in New York … This book does not claim to have all the answers, but its authors have accomplished admirable spadework', David O'Donoghue, Books Ireland (September/October 2014).

‘This meticulously researched and tightly argued work is not just a diplomatic history, but also a military account … the work goes beyond examining the challenges which the Congo posed for Irish politicians and foreign policy-makers and shows how the UN Mission in the Congo forced an evaluation of the concept of “peace-keeping” and also of the decision-making processes within the UN and on the ground in the Congo, set against the international context of the Cold War … This work picks through each layer of the engagement and is honest and fair in the apportioning of blame – of which there is much to go around’, Bernadette Whelan, Reviews in History (2014). 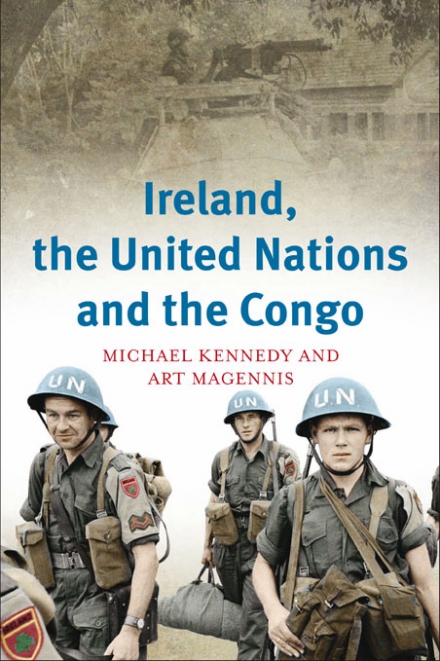