‘A work of considerable originality ... brimming with insights and warmth for the subject. It is one of those books that wants to share the subject’s secrets with newcomers rather than keep outsiders at bay, and the author’s passion for her field of study is writ large on every page … the delightfully evocative and freshly imaginative opening excursion through the physical landscape of early Ireland is taken at quite a canter before the book arrives at the more familiar territory of kingdoms and churches. Familiar themes they may be, but within them exciting new avenues of investigation are opened up … This is a book to read and re-read, it is a book to savour, to ponder and to explore ... it is in fact a joy. Is it value for money? It is worth three times its price’, Seán Duffy, History Ireland (May/June 2015).

‘Ireland in the medieval world is, in many respects, the twenty-first-century companion to Byrne’s Irish kings and high-kings (1973) … In her treatment of the landscapes of early Ireland, Bhreathnach focuses on the sea, wildernesses and settlements of the island … The real strengths of this book are the great breadth of scholarship that Edel Bhreathnach brings to kingship and religion and the immense energy behind her search for new ways of expressing early Irish medieval culture and society … It is a dynamic and novel reading of the early medieval past which will encourage further imagining of Ireland within the medieval world’, Elizabeth FitzPatrick, Studia Hibernica (2014).

‘A well-presented volume containing both colour and black-and-white images … it is largely a fascinating historical account of the nobility and the early Church in Ireland … The book excels in its use of historical and literary sources to explore the roles of kings and the Church in early medieval Ireland … this is a valuable addition to the library of anyone with an interest in the Irish past … it is interspersed throughout with examples that bring both the text and the past to life … It paints a clear picture of royal and religious life and surely succeeds in inspiring its readers “to explore the fascinating culture and history of early medieval Ireland”’, Michelle Comber, Journal of Irish Archaeology (2015).

‘Bhreathnach draws on archaeological evidence to supply insights into a society that has left only oblique views in the written record, proposing a revised view of the place of Ireland in medieval Europe … the book features eight pages of color plates and many photos, and is a must for academic libraries, particularly those with extensive history or archaeology collections. Essential’, Choice (December 2014).

‘[The book] narrates the story of Ireland’s emergence into history … well indexed and written in Dr Bhreathnach’s engaging style, this book is probably aimed at the more informed reader but contains something for anyone interested in this time in Irish history', Nick Maxwell, Archaeology Ireland (Spring 2014).

‘The foundations for this splendid book have been laid down over many years of research and the publication by the author of numerous papers that prepared the way for this substantial statement. Edel Bhreathnach combines historical, archaeological and environmental evidence with insights from anthropology to give the reader a fresh portrait of the landscapes of Ireland … A particular virtue of this book is the author’s attention to trying to understand how the institutions of early Ireland worked and how individuals were affected by them … it will repay reading again and again’, Michael Ryan, The Irish Times (31 May 2014).

An exceptionally well researched history of the period that is, very importantly, equally accessible to the general reader, student and academic … As a work of history, Edel Bhreathnach has not only revealed much of Medieval Ireland, but more importantly she has made Medieval Ireland more readily identifiable in our modern landscapes, place-names, family names and, of course, in our archaeological and architectural heritage. An excellent read. Highly recommended’, Michael Merrigan, Ireland’s Genealogical Gazette (June 2014).

‘History, anthropology, archaeology, law, literature and genealogy – it seems as if literally no stone has been left unturned in t his new book on Ireland in the Medieval world! As written by Edel Bhreathnach no less should be expected. But we still have to be grateful. This is where to start if you wish to get a sense of place … This is a grand book about the cultural history of a “lived-in landscape”: As a reader you get a perfect “sense of place” while being thoroughly entertained … Highly recommended not only for students and general readers, but simply for Medieval Travellers bent on discovering the fascinating history of Ireland', Karen Schousboe, www.medievalhistories.com (June 2014).

‘In this new and questioning era, Bhreathnach begins at the very root of the matter, by placing the modern study of history squarely in the ancient Irish tradition of seanchas, a branch of learning whose earliest glimmering we see in such works as the Leabhar Gabhála, wherein the then custodians of Ireland’s learning sought to integrate their received traditions into the  new biblical learning of Christianity. They created a story of the past as best they could with the materials at hand, just as historians do today ... let the trumpets flourish, a fine work has been born!’, Lenore Fischer, North Munster Antiquarian Journal (2016). 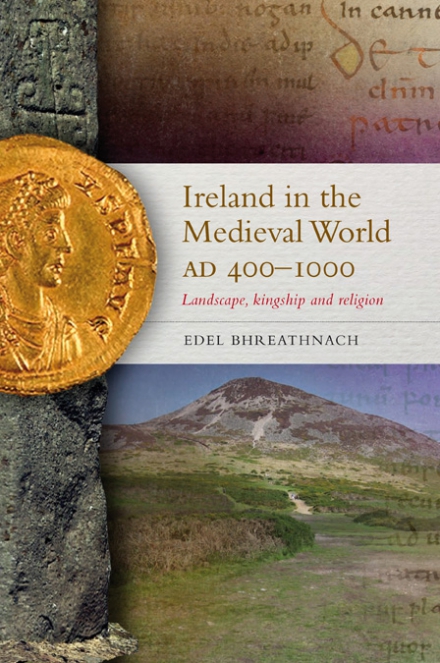