Lawyers, the law and history

The fourteen essays in this book cover a wide range of topics within the field of legal history. Most are adaptations of discourses given at meetings of the Irish Legal History Society between 2005 and 2011; the remainder were submitted to the Society for publication during this period.

The essays are grouped thematically into two sections. The first, ‘Lawyers in history’, is made up of essays that are largely biographical. One of these is about the recently published Dictionary of Irish biography, and the judges, barristers, solicitors and litigants who are included in the Dictionary. There are two essays on, respectively, the first judges of the supreme court of judicature of Northern Ireland and the three judges of the supreme court of the Irish Free State in the years 1925 to 1936, and another on James Joyce’s treatment of lawyers and the law in Ulysses. The last three essays in this section examine aspects of the careers of Daniel O’Connell, Edward Carson and William E. Wylie – all distinguished Irish lawyers.

The second section, ‘The law and history’, comprises essays on eighteenth-century Scottish law on slavery; the role of the sheriff in nineteenth-century Ireland; the establishment of the Inn of Court of Northern Ireland; continental European influences on the drafting of the Irish constitution of 1937; judicial dress, with particular reference to the county and circuit courts; the Cicero collection in the King’s Inns Library in Dublin; and, finally, the medieval Irish chancery rolls destroyed in the explosion and fire in the Public Record Office of Ireland, part of the Four Courts complex in Dublin, at the start of the civil war in June 1922.

This book – the sixth volume of essays published by the Irish Legal History Society – is an important contribution to extending and deepening our understanding of the legal past. The contributors are leading figures in the world of the law or in the world of history, or in both. 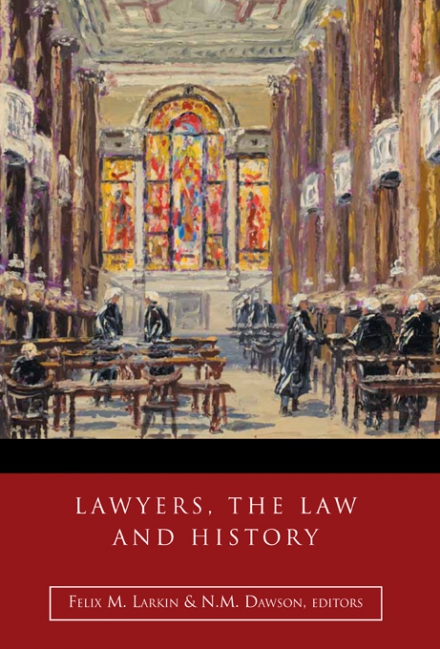