John Toland’s Letters to Serena is one of the most important texts of the early Enlightenment. Synthesizing an array of European thought – from radical biblical hermeneutics to republican politics; from ancient Stoicism to Newtonian physics; from ‘sociology’ avant la lettre to the metaphysical speculation of Leibniz and Spinoza – the Letters was not only significant for Toland’s own ‘freethinking’ cause, but also provided crucial foundations for the ‘vitalist’ materialism characterizing later Enlightenment thought. Despite the historical and intrinsic significance of the text, this is the first modern, English-language, edition of the Letters since its original publication in 1704. Accordingly, the editor provides a comprehensive introduction, a contextual ‘timeline’, full annotations and a bibliography. As the introduction suggests, this long overdue edition of a book that bursts with ideas, with intellectual energy and with brilliant, crackling prose will allow something of Toland’s full force to be felt again, more than three centuries after its original, explosive, manifestation.

Born in Inishowen, Co. Donegal, John Toland (1670–1722) was one of the most significant Anglophone intellectuals of the early 18th century. A native Irish speaker who wrote wonderful prose in English, Toland blazed a remarkable trail across Europe, becoming famous – and infamous – as philosopher, scholar, freethinker, pamphleteer, controversialist, and scourge of political and religious conservatives. He became directly acquainted with so many of the great philosophical and political figures of his age, working tirelessly, and on all fronts, to further the cause of the early Enlightenment. And, as part of this labour, he produced philosophical texts – most notably, the Letters to Serena – which are only now being appreciated for their insight, perspicuity and creative profundity.

This publication has been made possible by the generous financial support of the Mater Dei Research Committee.

Ian Leask is a lecturer in philosophy at the Mater Dei Institute, Dublin City University. A graduate of Queen’s University, Belfast, he has published widely in the history of philosophy and in Continental philosophy. 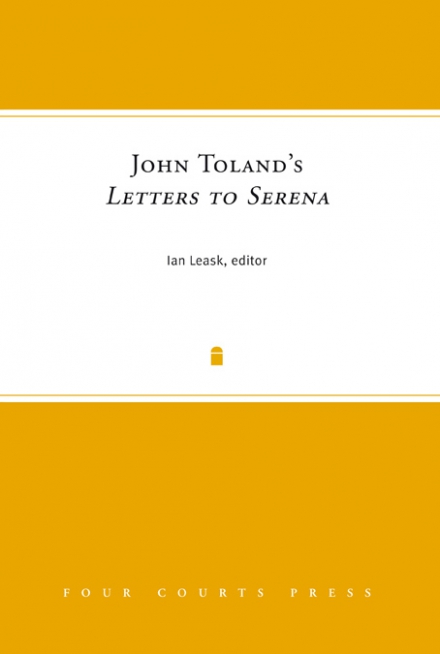