‘This book reasserts Milligan’s centrality in the intellectual battle to imagine the sort of radically different Ireland which might arise if Ireland achieved true independence. Milligan is a fascinating figure ... Morris’s book shows her as a dynamo … Morris is superb at placing Milligan’s changing ideas within the context of other activists in the revival movement … Crusading in its zeal, yet impressively researched and impassionedly argued, Morris’s book restores Milligan to a central role in the debates of those years, and in doing so Morris re-examines Ireland’s Cultural Revival and the gap between the nation it envisaged and the dour state which came into existence', Dermot Bolger , The Sunday Independent (Sunday 26 February 2012).

‘[Milligan’s] complex identity represents a challenge to all received categories of thought, nationalist as well as unionist, republican as well as loyalist, feminist as well as Fabian. Like all who have a gift for explanation rather than simplification, she felt finally at home “nowhere”, dying without possessions or fanfare. Yet she did more than most of her brilliant generation to expand the expressive freedom of citizens, and even in today’s Ireland we are still learning how to be her contemporaries. Morris’s book is a feat of astonishing research, at once an act of historical rehabilitation and of audacious interpretation’, Declan Kiberd, Irish Times (Saturday 10 March 2012).

‘Performs the important task of relocating the activist, playwright, poet and editor Alice Milligan as a much more central figure within the movement by shifting the scholarly focus to Belfast and rural areas in the north of Ireland, and highlighting the role of newspaper journalism, street theatre, and public commemorations for the Revival specifically and for Irish nationalism generally. Morris provides a full picture of Milligan’s life and background [and] gives a good sense of Milligan’s political awakening … To provide a more complete picture of Milligan’s life and career, Morris has also collected the reminiscences of family and friends, photographs, diaries, letters, radio transcripts, and much more. In this, she has done a significant service to women’s history … The book is well-edited, with illustrations and photographs that give an immediate sense of Milligan’s time and circumstances … this an impressive example of rigorous research and careful documentation, and offers a fresh approach to an often-researched period in Irish cultural history. A welcome component is the extensive presentation of some of Milligan’s prose and drama … The book brilliantly demonstrates the value of a cultural studies approach for uncovering contributions to the Irish Revival that are given rare scholarly attention [and] provides new ways of understanding the varied manifestations of the Irish Cultural Revival', Heidi Hansson, The Latchkey (2013).

‘[Milligan’s] whole life was informed by her mission to make a difference and to make the connection between responsibility and action. And act she did … As a republican activist all her life, her involvement spanned the period from the mid 1890s, the 1898 centenary of the 1798 Rebellion, the struggle for Independence of 1916 through to the Civil War … it is as much her role in what has come to be called the Irish Literary Revival and in the work of the Gaelic League that her enduring mark is made … She threw herself into the Irish language movement … This profound work by Catherine Morris is detailed, well referenced and does some considerable service to current debate. Most of all it affords the reader a view of Ireland and the North before the “carnival of reaction” (in both Southern and Northern sectarian States) that Connolly predicted would be the enduring legacy of partition. In doing so it also offers a glimpse of the possibility of a better, more inclusive future on the whole island … a book which not only remembers a great Irish woman but is one to inform and above all to inspire', Michael Halpenny, Liberty (March 2012).

‘Alice Milligan was a key figure in the Irish Cultural Revival of the late 19nth and early 20th centuries, displaying passionate energy in the promotion of Irish national identity, and both psychological and political independence … Alice Milligan knew, corresponded with, and influenced many of the leading figures of Irish cultural and political life. Thomas MacDonagh called her “the most Irish of living poets”; George Russell (Æ) said that she had written “better verse than any of our women writers” … this book is packed with information, references and the interesting ideas of both Alice Milligan and Catherine Morris … Catherine Morris makes a good case for the significance of Alice Milligan in the Irish Cultural Revival … the value of Catherine Morris’s work in tracing and providing a commentary on Alice Milligan’s writing and influence is both admirable and undeniable … Catherine Morris’s achievement with this book is considerable', Brian S. Turner, Bulletin of the Methodist Historical Society of Ireland (2013).

‘The volume contains a stunning collection of colour plates of decorated book covers, some of Milligan’s sketches for theatrical costume designs and commemorative postcards produced in 2011 for International Women’s Day … This monograph crowns a striking scholarly contribution by Catherine Morris that was inaugurated with an exhibition at the National Library of Ireland', Angus Mitchell, History Ireland (Nov/Dec 2012).

‘With her enthusiasm and persistence in managing to locate the writer’s archive, and relevant correspondence, Catherine Morris has constructed a striking, multi-layered account of Milligan’s long career, generously illustrated throughout, and including delightful sketches from personal diaries, photographs and Milligan’s costume designs for theatre', Hilary Pyle, Irish Arts Review (Summer 2012).

'I fell on this book like a ravening wolf and came away well satisfied … in the picture on the cover she looks a feisty little number … she was amazingly productive … She was amazingly productive … She was an acquaintance of Yeats, Pearse, Connolly, Douglas Hyde, George Russell – all the leading figures in politics and the arts of her day … Morris’ book crams in a wealth of detail about and quotation from this extraordinary woman. Feminist, journalist, republican, psychic, novelist, poet: from the early 1890s to the 1940s, Milligan worked tirelessly to re-awaken the radical Protestant republican tradition of Wolfe Tone … An absorbing biography', Jude Collins, Irish Echo (16 May 2012). 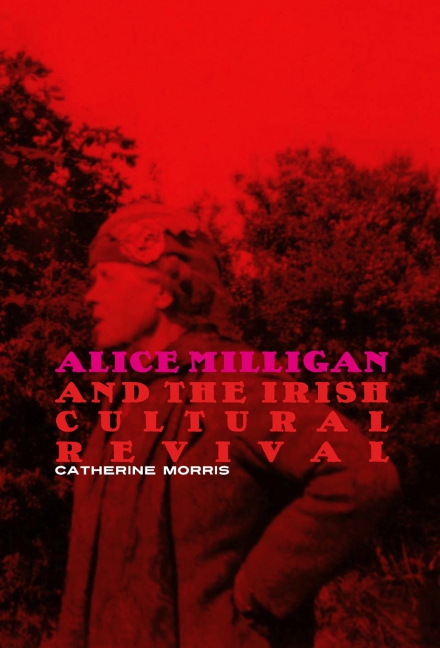