A capital in conflict

Dublin city and the 1913 Lockout

‘This beautifully produced book is a feast for anyone interested in Dublin’s history. While the focus is on the 1913 Lockout, it covers almost every aspect of life in the city. Francis Devine is an ideal editor for such a work … Colin Whitston’s essay fills an important gap in the study of the conflict … Lydia Carroll makes excellent use of the material and provides a judicious assessment of Sir Charles Cameron … Karen Hunt’s chapter on “Women, solidarity and the 1913 Lockout” provides a wealth of insights on what was the most contentious aspect of the lockout', Pádraig Yeates, Dublin Review of Books (May 2013).

‘The title might lead one to think that this is anther book about the Lockout but the wide range of topics under consideration also covers the cultural, literary and social life of the city at the time … this book should prove a valuable resource for the interested reader or student wishing to delve further into the events of 1913. While each contribution stands on its own merits, taken together they give the reader a comprehensive picture, not just of the Lockout but the background to the main events of that tumultuous year’, Dublin Historical Record (Spring/Summer 2015).

‘Only in recent decades has a full picture emerged of this most important struggle in Irish labour history. This impressive new collection of essays … adds to that debate while wisely avoiding the temptation to provide another linear narrative of the events. Instead, it captures aspects of Dublin in 1913, amid all its teeming squalor and ideological battles … In this centenary year, this thought-provoking, well-researched collection of essays throws new light on the main events, participants and background to the Lockout. It will fascinate anyone interested in the social conditions and political situation in Dublin at the start of the 20th century', Dermot Bolger, Sunday Business Post (2013).

‘The 1913 Dublin Lockout still resonates in our historical imagination and this book is a timely addition to the corpus of scholarship on the subject … The book itself is excellently produced with beautiful illustrations and photography … A glossary provides an insight into the various acronyms and ideological sects that populated the labour movement at the turn of the 20th century. Dublin city’s economy, labour market, living conditions, literary and artistic culture and municipal and cultural politics are all examined across some 16 essays … The twin aims of this collection appear to be to provide a sourcebook to accompany other more narrative works on the Lockout and to give a snapshot of various aspects of the life of Dublin city during 1913. It is successful on both counts … the authors have done a superb job. The sufferings, experiences and images of working class Dublin at the beginning of the 20th century shine out of the pages. A noteworthy aspect of these collections is the intensive and thorough representation of the experience of children during the period, a group frequently ignored in scholarship … For those not already intimately familiar with the period, these contain more newly unearthed information and original analysis. This book will be of great assistance to amateur and professional researchers or to anyone simply with an interest in the history of Dublin during this turbulent time’, Ross Higgins, Irish Archives (2013).

‘Focuses on the lives of ordinary workers and their families during that epic struggle and it is they who, in the words of the book’s back page blurb, “… shine through the pages of this volume”. The editor’s introduction is an excellent and thoughtful overview which sets the scene as well as the timeline for the conflict … there are excellent illustrations … Each chapter/essays is accessible and at, on average, 20 pages or so, can be dipped into and easily read on a stand-alone basis. This is a veritable “tool-box” to aid the study of the Lockout and the city, and an extremely valuable contribution which is testament to commitment and scholarship of all involved … a truly civic endeavour', Michael Halpenny, Liberty (April 2013).

‘Francis Devine has assembled a collection of essays with a wide spectrum of scholarly learning and a variety of interpretations of these historic events in a volume that establishes the very considerable significance of the lockout for the social and political development of our society in the last century … In doing so, he has put Jim Larkin where he belongs in this story: right at the centre and playing a leading role', Hugh McFadden, Books Ireland (Summer 2013).

‘This collection brings together a mix of well-established Irish labour historians and new voices … the book really delivers when it addresses the popular memory and perceptions of the labour dispute. It is a welcome contribution to the centenary year of that great and tragic chapter in Dublin’s history', Donal Fallon, History Ireland (July/August 2013).

‘This substantial collection is concerned with the events, characters and lived experience of the 1913 Lockout. However, it goes beyond this to consider the broader context of the social, political and cultural life of the city, with essays examining Dublin’s economy, labour market, social and living conditions as well as culture and politics … This book helps to explode some of the myths surrounding the events which began in August 1913 … the multiple readings of different aspects of the Lockout which appear here can serve to enhance the reader’s understanding … the research compiled in A capital in conflict throws new light on the period, with the essays here providing additional detail, context and a rich range of sources’, Ruth McManus, Irish Literary Supplement (Spring 2016). 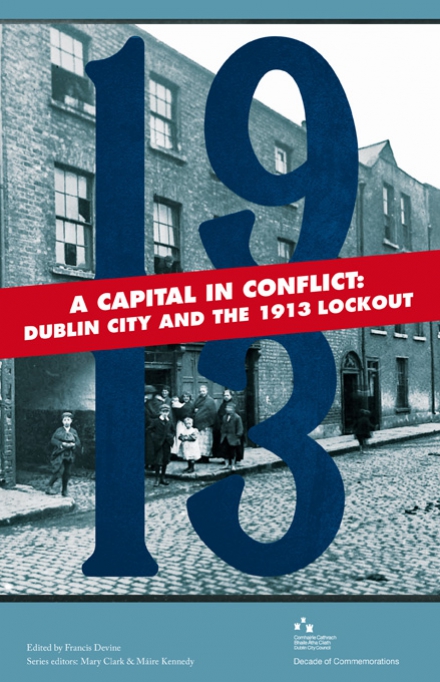