‘This book, written by a professional Irish surveyor, is a fascinating study of the profession, its techniques and characters, the art of their maps and their impact on the rapid growth of Dublin and environs in the Georgian period … By telling anecdote and sharp observation, the book brings the character of the surveyors, artists, frauds and rogues to life like the cast in a Sheridan play. It demonstrates the interrelated role of the surveyor and his clients in the open microcosm of one city in a clear and readable manner, with much illustration and reference', Graham Arnold, Context (March 2014).

‘Resurrects the importance of the surveyor in the shaping of the city … this book, while an excellent history of a much neglected but vital profession, reveals much about the evolution not only of map making but of the social fabric and development of late eighteenth-century Dublin', Raymond Gillespie, GSIHS (2012-13).

‘This book is a revelation for anyone who loves old maps of Dublin for their intrinsic value or as primary source material for the topographical history of the city … John Andrews has written a short introduction to this excellent book and concludes that Ó Cionnaith succeeds in humanizing the men behind the maps … Ó Cionnaith considers the work of Dublin’s period surveyors as part of the city’s living hertiage. We are indebted to Four Courts Press for producing this innovative book … Finnian Ó Cionnaith has put the surveyors of 18th-century Dublin on the map, who as he points out had often been overlooked by history in preference to contemporary architects and artists. No longer so, thanks to this excellent book', Anngret Simms, Irish Arts Review (Winter 2012/13).

‘Throughout the book, the author relates engaging stories that illuminate the daily life, concerns and practices of the several land surveyors that operated in and shaped Dublin city in the eighteenth century … Ó Cionnaith is a surveyor himself and his personal undersanding of and enthusiasm for the profession is clearly evident … This book is a welcome contribution to the broad subjects of historical mapping in Ireland and the development of eighteenth-century Dublin. Ó Cionnaith’s attention is consistently tuned into “the men behind the maps” … Central personalities reoccur throughout, in different contexts, reminding the reader that the primary strength of this book is the dedicated insight it offers into the lives and personalities of the eighteenth-century land surveyors', Sarah Gearty, Irish Geography (2013).

‘Written in a ... flowing and readable style. The author, a land surveyor himself, produces in-depth listing and really does try to get underneath the personalities involved ... the first chapters create a colourful picture of life in the surveying industry with all its attendant issues, infighting and vices ... This is a good looking book, well laid out, eminently readable and very well illustrated. Even though the instrumentation and cartography sections could apply to almost any city of the period, the author brings what could be a dry subject to life by impressively weaving in the surveying personalities of the time', James Kavanagh, Geomatics World (March/April 2013).

‘[Ó Cionnaith] aims to show how “one of the most profitable and genteel professions” helped shape the city and left a lasting mark on this, one of Europe’s most beautiful cityscapes, at an important time in its growth and development. This he does most effectively and comprehensively by giving a very thorough analysis of the profession itself, the science behind its procedures and instruments, the art displayed by its cartographic products, and finally the lasting impact of one of Dublin’s most important public bodies, the Wide Streets Commission … What is a major achievement of this book is the manner in which the author places surveying and mapping in the context of society and the economy of Ireland and Britain', Iain C. Taylor, Geomatica (2013). 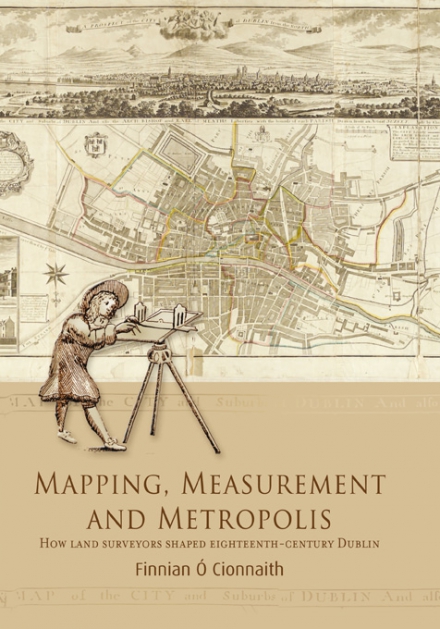