Readings, hymns and prayers for the commemorations of Scottish saints in the Aberdeen Breviary

‘This is a magnificent achievement worthy of a special place in Scotland’s history’, Dauvit Broun, Cambrian Medieval Celtic Studies (2016).

‘Excellent … The facing-page translation of the main section is central to the usefulness of the book. The original Latin text will be valuable not only to academic historians and liturgists, but also to Latinists. The English translation, which is both precise and readable to a modern audience, will make the book accessible to non-specialists ... The main text is framed by material that will be of tremendous assistance to both specialists and general readers … Readers will be rewarded if they treat this volume not simply as a reference book in which to look up figures about whom they are already aware, but rather as something more like a collection of annotated short stories … It is difficult to convey just how entertaining is this very erudite tome both in the main text and in Macquarrie’s colourful and learned commentary, and someone reading the book straight through or even skimming it with curiosity will find no shortage of engaging and enjoyable material that is also a rich source for Scottish history', Mairi Taylor Cowan, Journal of Scottish Historical Studies (2014).

‘[This book] compiles into one handy volume the commemorations of Scottish saints from the Aberdeen Breviary … the Breviary is a mine of information on the lives of numerous saints as well as local traditions and legends … Dr Macquarrie’s new edition provides translations, notes and commentary on the more than 90 saints that the compilers of the breviary thought to have a Scottish origin or to have had some hagiographical connection to Scotland. The introduction explores the fascinating history of the Aberdeen Breviary project … The final section contains useful notes and commentaries on the individual saints included in the Breviary … This superbly edited, translated and annotated volume is a welcome addition to the relatively sparse range of easily accessible late medieval Scottish texts. For both specialist and general reader it provides a reliable text and translation. For anyone with interest in their local saint(s). Dr Macquarrie’s book with its texts and comprehensive bibliography will prove invaluable', Tom Turpie, History Scotland (March/April 2014).

‘This book is a treasure-trove of information about early Christian traditions in Scotland … In these readings we enter into the strange world of hagiography, the “writing about saints”, in which fact and legend, the mundane and the supernatural, are curiously blended. The saints of old are heroes, miracle-workers, magicians and prophets, and can be very dangerous when crossed … Their stories were intended to edify and terrify, to encourage visits to shrines, veneration of relics, respect for rights and property, and the giving of alms; they were also intended to entertain. The saints were heroes, but they were local heroes; all of their stories are firmly rooted in the land from which they came. They tell the origins of the churches that they founded, and details about the places and landmarks they visited. So this book has a great deal of information which will be of use to local historians. It is a very wide-ranging source', History Scotland (Spring 2013).

‘A monumental work of scholarship … The book also has an extensive introduction discussing the breviary, liturgy and the cult of saints, full notes and commentaries discussing the office and cult of each saint and useful indices. The hundred pages of notes and commentary at the end of the book are a major scholarly contribution in their own right … As well as being an excellent edition this volume is a handy summary of recent scholarship on the Breviary and medieval Scottish hagiography … This is an outstanding academic endeavour … [it is] a sound reliable text and translation. The authors state their general aim as to “open up this source for fuller study” and in this they are triumphantly successful, giving modern readers a way into the medieval clerical mind. The book will be an essential tool for historians of Scottish devotion, hagiography and liturgy, as well as being of interest to the committed amateur’, Stephen Mark Holmes, Scottish Historical Review (2015).

‘The Aberdeen Breviary, published in Edinburgh in 1510, has two main claims to fame. It is Scotland’s first printed book and it is the most important collection of information on the lives and legends of the Scottish saints … Somewhat surprisingly given its importance in Scottish ecclesiastical history, there has been no new edition of the Breviary since the so-called ‘facsimile’ volume published in 1854 without translation, notes, index or scholarly apparatus of any kind. It was a wise move to put the editing of this new edition into the hands of Alan Macquarrie … almost certainly the leading living authority on the Saints of Scotland. He has been assisted in his labours by Rachel Butter, Simon Taylor and Gilbert Markus who bring their own specialist knowledge of the cult of saints and Scottish place names to the project … [this is a] handsomely produced volume … the original Latin text is printed on the left-hand pages and an English translation on the right … the extensive scholarly notes on the text deal with each saint alphabetically … The superb standard of editing and the high quality production make this edition of the Aberdeen Breviary a very welcome addition to the resources available to anyone wishing to learn more about the fascinating and often complex background to the cults of the Scottish saints in the Middle Ages … local libraries should be lobbied and encouraged to add this to their collections as an extremely valuable work of reference', Ian Bradley, Theology in Scotland (2013).

'[This is the] first thorough editing for 150 years, providing an English translation for the original Latin. It’s a treasure trove of Scottish cultural and religious heritage and will undoubtedly now be fossicked over by a legion of interested researchers. Even traditional story tellers will find material here that will augment their own accounts of Scottish religious figures, like Ninian and Columba, who often feature in our folklore … This is a work of enormous scholarship. It’s going to be widely celebrated by all who have an interest in the ecclesiastical and cultural history of our nation', Cothrom (March 2013). 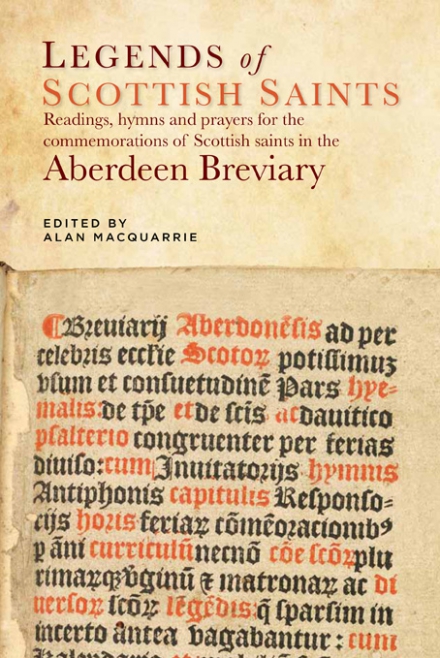