‘Toby Barnard is perhaps the consummate historian of the quotidian … He has produced a body of work that has transformed understandings of the material and cultural worlds of Protestant elites and the middling sort, and breathed new life into topics, such as collecting, gardening and clothing, that had long been the province of antiquarians and connoisseurs … given Barnard’s attention to material culture and aesthetics, the book is a fine artefact in itself, lavishly illustrated and including a comprehensive bibliography of his output. In substance as well as style it is a fitting tribute to Barnard’s innovative and prodigious scholarship’, Padhraig Higgins, English Historical Review (June 2014).

‘A wonderful collection of essays which were presented to Professor Toby Barnard on his retirement from university teaching … contains essays by distinguished historians of early modern Ireland … the bibliography of the major writings of Toby Barnard is a fitting testament to his enormous contribution to Irish history and historiography', Michael Merrigan, Ireland's Genealogical Gazette (November 2012).

‘An appreciation by Roy Foster of Barnard’s career is delivered with that historian’s usual verve and erudition … There is much here to engross and inform the reader … One of the most entertaining articles concerns the stuccodore Lafranchini brothers and other Swiss craftsmen from Lake Lugano who worked in Kildare … This is a fine salute to an accomplished career … [the book] is well bound on good paper and entertainingly illustrated', Rory Brennan, Books Ireland (Summer 2013).

‘[The book’s] focus on material culture is a testament to Barnard’s ingenious use of such ephemera as inventories, decorative objects and tradesmen’s bills to fill in the gaps where the state papers are silent or where no official records exist … the innovative lines of inquiry found in this volume will also be on interest to those working outside of the revisionist paradigm … [it] adds to our understanding of the contingent, fluid and hybrid nature of Ireland’s Gaelic and Jacobite cultures', Wes Hamrick, Léirmheasanna (2013). 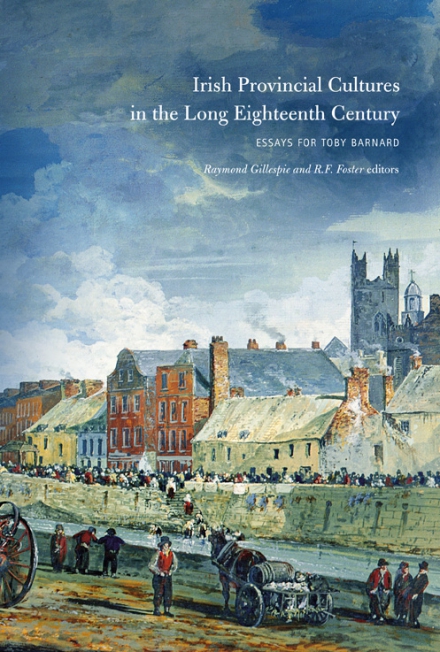