'Those of us who study or teach the history of medieval Ireland have long bemoaned the unavailability of Robin Frame's superb survey, Colonial Ireland, 1169-1369; its reappearance in this sparkling new edition is therefore a cause for celebration', Professor Seán Duffy FTCD.

‘Robin Frame’s Colonial Ireland, 1169–1369 was very well received when it was first published in 1981, and it is a reflection of its success that this second edition is also being widely read by students. The book is written with an ease and style that is very appealing and Frame is able to articulate quite complex matters in a manner that students and specialists alike will find attractive … the book provides an important introduction to the individuals and the policies involved in the colonisation process … [this is] a valuable introduction to later medieval Ireland', Niall Brady, Journal of Medieval Archaeology (2013).

‘In this second edition, Robin Frame has refreshed the work first published in 1981 by a number of corrections and additions including a new introduction, a postscript, more maps and tables of lineage plus some thirty reproductions of manuscript pages, effigies, plans of towns, sites of monasteries and castles. He has also updated his commentated bibliography for further reading … the work as a whole is a fine study of the colonization of Ireland in all its complexity', Yolande de Pontfarcy Sexton, Sehepunkte (2013).

‘Robin Frame’s Colonial Ireland was first published in 1981 … It pulled off that difficult feat of being both a stimulating read for the specialist and an accessible introduction to medieval Ireland for the undergraduate. It is exactly the sort of book one urges students to buy, read and reread and now, thanks for Four Courts Press, this core text is available in a new, updated and reasonably priced edition … Colonial Ireland in this newly updated edition will no doubt be read with enjoyment and profit for at least the next 30 years. The author deserves our gratitude', Margaret Murphy, GSIHS (2012-13).

‘Colonial Ireland anticipated and often inspired the scholarship of the next three decades – which is why its interpretation remains so fresh in 2012', Peter Crooks, History Ireland (May/June 2012).

‘Frame goes in some detail into the English settlement from the early days of makeshift outposts to manors tenanted by imported settlers. He uses charters from kings and nobles to gain insight into the nature of both English and Gaelic Ireland. He reveals a complicated picture in terms of the dynamics within the colony and the role played by native leaders. He uses royal records of courts and tax collecting to pain a picture of an established English “kingdom” in Ireland … On the whole Frame presents a balanced picture and argues that events took their course from opportunities presented, the clash of personalities and other extraneous influences', Tony Canavan, Books Ireland (September 2012). 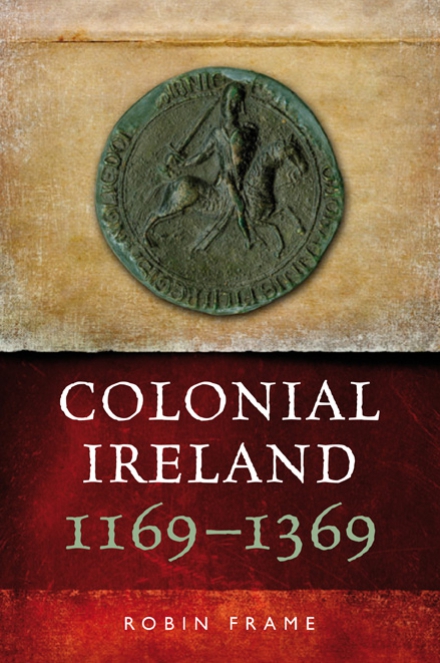